A Change of Face 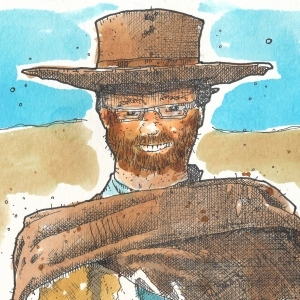 I thought that I ought to do a profile picture.

The picture I tend to use for most of the social media sites I use is a rather badly photoshopped photograph of me as a Spaghetti Western cowboy.

So instead I thought I would use a drawing of a badly photoshopped photograph of me as a Spaghetti Western cowboy.

And I always said that I don’t do portraits …

Okay, so the slightly strange commission I’ve completed this week was a leaving present for someone.

Apparently they are a huge fan of a popular reality TV programme, in which one of participants created a portrait using elements from different faces.

So my brief was to use the following photographs to create a portrait.

Now, portraits are not something I ever really try to tackle, I think it’s because the slightest error in placing a line can make such a huge difference. Faces are so very familiar to us, especially close friends, celebrities and family (But, as I’ve been told, a fried egg just looks like a fried egg).

So I used the lady with the blonde hair as the base figure. Ash she was the recipient/subject of the portrait I decided to use her eyes and nose.

The beard definitely had to be used.

I rather liked the distinctive hair of the second gentleman, but instead opted to use his mouth, so I could use the second lady’s hair style and colouring.