s a wonderful, open-air museum in the North of England.

Wonderful because it covers 300 acres of land. It is possible to hop on a tram to take you round to the different places, but we often prefer to walk around – a fantastic day out.

There is a whole, early 1900s, mining village and colliery, for example; complete with school, shops, church and Davy’s Fish and Chip shop – which serves beef dripping fried fish and chips from coal heated fryers. Served in paper cones and eaten with your fingers. Delicious. And well, worth the queue!

There’s another section that has a complete farm.

There’s a Victorian town; with dentist, bank and other shops, including a bakery serving bread and an ice-cream parlour and a pub. (In fact on a trip here with friends, some years ago, we pooped into the pub and totally lost track of time. By the time we’d had a couple of pints and stepped back into the Victorian Town we’d totally forgotten we were in a museum)

It’s very easy to get swept up in this historical museum. And very easy to spend a day at the fairground, or visiting the country mansion.

Heavy snowfall across the country kind of put a stop to my joining in with the Sketchcrawl North group meeting up in cafes around Sheffield. I’d been really looking forward to a whistle-stop tour of Sheffield cafes and getting in loads of foodie drawings in. Ah, well!

I carried on with a bit of work at home instead. But I’d forgotten that Lucy and Caroline were popping out in the afternoon. I tagged along, and while they were busy I headed for The Golden Hind Fish and Chip shop. This is where we tend to get our fish and chips on Fridays, for our tea.

And luckily, for my purposes, it has an attached restaurant …

And I discovered that half-past two on a Saturday afternoon, after a snowfall, is not a particularly popular time to eat at the Fish and Chip Restaurant. The place was deserted!

The waitress didn’t seem too pleased to see me (But to be honest, I think that was because I dumped my bag and jacket on a chair, only to realise once the waitress approached that it had only recently been vacated and she hadn’t cleared it yet! So there I was, the only customer in the place and I chose the one table that still had batter-crumbs and half eaten pots of tartar sauce strewn over it!) 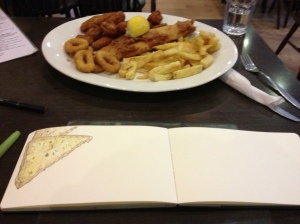 Once I’d drawn the bread and butter I started to chow down on that whilst I figured out how I was going to tackle this huge pile of fishyness.

Rather than draw the whole plateful of food I decided to go for drawing the individual components; which means that as I draw them I can eat them. (I like drawing the whole plateful, but it does mean that I have to complete drawing everything before I can eat it. At least drawing components means I can enjoy some warm food as I go along. Remember: I’d tramped through snow and slush to get here!) 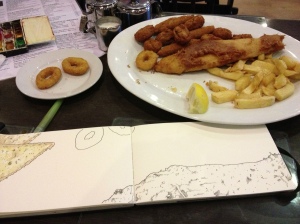 I sketched in the fish along the bottom; to frame the drawing and to leave a space in the middle of the page for writing. I thought I could draw the other elements of the meal dropping down from the upper frame. 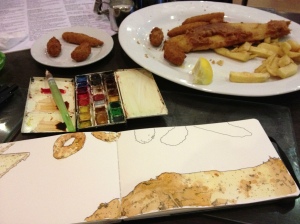 So, I started colouring in with watercolour – I used a light base colour and added in the darker areas of the batter straight away. While that dried I coloured in the Calamari Rings, as they were in a similar coloured batter. 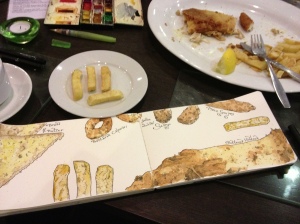 It amused me to have the chips in an ordered row, rather than the pile that they were in on the plate. You can see that I ‘d started to tuck into the fish and some of the other things on the plate by now. (And no, the fish wasn’t totally cold. It was still, slightly, warm!)

I knew I wanted to put the restaurant’s name and logo in the bottom left-hand corner by now. 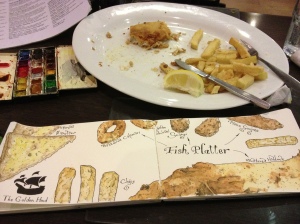 While I waited for the waitress to return, so that I could ask for the bill, I drew in the logo and name and added the name of the meal from the menu (She’d come in a couple of times earlier on in the drawing, but by now I think she’d given up on me ever finishing my meal!)

I finished off the rest of the writing later.

(A CD of ‘Hits of the 40s’ was playing the whole time I was drawing, and I’d gone round all the tracks at least twice by the time I left)