Building my own burger again

We popped out for lunch just before we were to send Lucy off on a residential school trip to the Lake District. 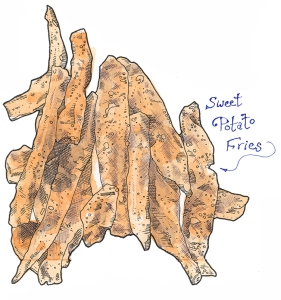 There seems to be a real trend towards Sweet Potato Fries at the moment. They’re everywhere. I guess it’s a sweeting-tasting alternative to the blander, regular fries.

They’re quite moorish already, but I wonder what they would be like with a sprinkling of paprika on them? 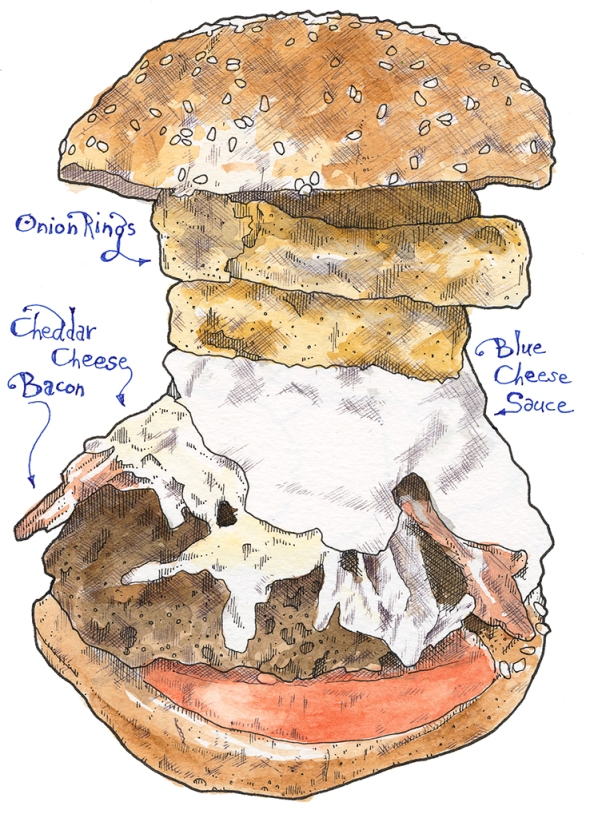 I had to go for my favourite Build-Your-Own-Burger option from the menu.

(I actually added in a Black Pudding too, but that didn’t really work out for me, so i took it out)

It’s been a while since I’ve used biro in my drawing as well as my regular uni-pin. It’s really useful for getting in the finer shades of grey into a sketch, but most definitely not to be used for anything work that’s going to be displayed in light; as the biro fades over time. 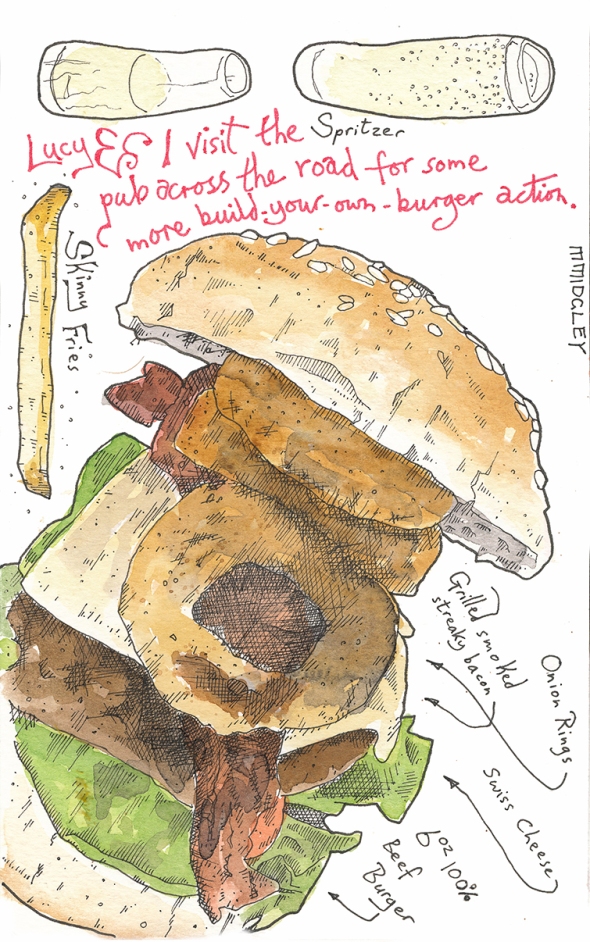 Ah me! Another day, another burger.

(You do realise that these burgers aren’t all eaten in quick succession, don’t you?)

The beef burger is my achilles heel, I suspect. As a food form I feel it’s got so much more to offer than we presently see. I think it’s still trapped in the stereotype of the fast-food franchise. Some restaurants are trying to change that, but it must be difficult to alter the public’ perception when it so deeply ingrained. The fast-food chain White Castle started in the early 1920’s!

There’s nearly a hundred years of this form of food being served in the this specific way. It’s really only in the last fifteen years, or so, that we’ve started to see a change in the on-street presentation of the beef burger.

I relish the idea of it evolving into something greater.

It is only a hot meat sandwich.

High Park – Build Your Own Burger

I’m not sure that this is what Caroline had in mind when she told me that I had to sort out Lucy’s tea for her.

It is sometimes a little too convenient having a gastro-pub just across the road.

We had fun building our own burgers.

It’s great being able to have a little control of putting it together. A gastronomic construction kit.

I’d like to see a bit choice in there to be honest. Hey, we’re in Yorkshire, so why not, say black pudding (A baked blood sausage). Why isn’t there a more fish-orientated patty? Or some more eastern-orientated sauces, such as teriyaki or hoisin.

I vote for more options on the “Build Your Own …” menu –  so they can go off into very esoteric, and idiosyncratic, directions. All Lucy came up with were pretty similar burgers to ones we’d had in other places. While it was fun having a bit of control, it would have been even cooler to have been able to create something with a more unique feel.

Eating Inn – Building my own burger

Well, I say ‘pub’, but really I should say gastro-pub, which is what a lot of traditional old pubs have been adapted into to survive. Long gone are the days of pubs being crammed with burly working men after a hard days work. Nowadays one is more likely to see suits and ties, than flat caps and cigarettes.

Mind you, the pub across the road was built as a gastro-pub.

It’s got a pretty good vibe going on; the menu changes every so often and the staff are always bright and friendly. Now and again I even pop in for a drink on my own; something I would even have considered doing before I started drawing again.

It also makes for a very convenient stop-off for Lucy and I when Caroline’s working away and we want a quick and easy bite to eat. Today was a bit snowy and we voted as a family to trudge across the road for the cosy fire and meeting up with friends who live round the corner.