Setting myself up for the day 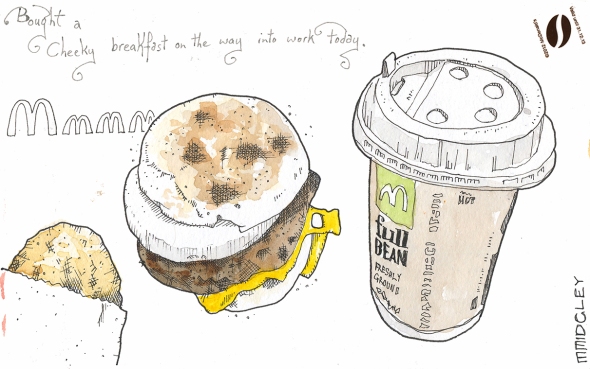 Now, I’m not keen on bread at the moment, so I actually stripped the muffin-thing back to just the egg and sausagegy-ness and one of my work colleagues pinched the hash brown

I’m not totally against fast food, but some of the bits I can really do without. 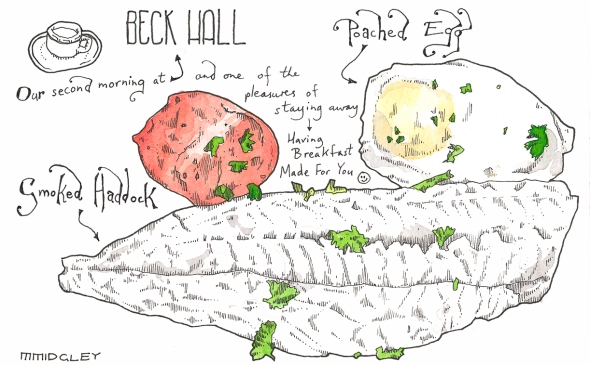 For my first (hearty) breakfast at Beck Hall, Malham, I had a full English breakfast and thought I’d branch off into other areas of the breakfast menu today.

One of the really cool things about staying over at hotels and guest houses – or bed and breakfasts is that someone prepare’s your breakfast for you, yes. That is so cool when the sleep is still getting rubbed from your eyes.

Even better when there are items listed on the breakfast menu that you wouldn’t dream of trying to tackle usually at home for breakfast.

So I’m treating myself to Smoked Haddock with a poached egg this morning.

I’m not sure how I stand on the whole ‘teaching fish to smoke’ issue. To be honest, I wasn’t even aware that it was a problem.

And I think I also feel rather uncomfortable about the egg, too. Couldn’t they have just bought one from a shop? 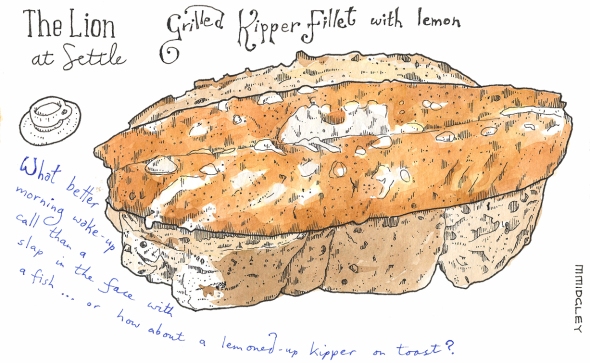 Final morning of our short visit to Malham and Settle up in the Yorkshire Dales.

I opt for an invigorating breakfast of grilled kipper.

It was served on a huge hunk of granary bread and I managed to snaffle a bit of Caroline’s scrambled egg to add to it.

Going to work on an egg 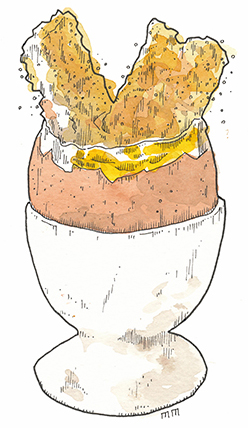 This is probably the closest I’ll ever get to joining the army – dunking toasty soldiers into my boiled egg.

Nearly every morning I start my day with some kind of egg-based breakfast. My favourite being fried, should you ask.

They do say that we should ‘Eat breakfast like a king’.

A full, protein-rich breakfast can set you up for the rest of the day.

And when it’s taken in such lovely surroundings as these – it’s such a lovely, luxurious treat.

Throw in a bunch of good friends –  and life couldn’t be better.

As Lucy has grown up we’ve always made a point of visiting London on a fairly regular basis; at least three times a year.

Usually it’s been a pretty good excuse to go to the theatre (Lucy and Caro are pretty much the Musical nuts of the family. Me? I much prefer older, more traditional musicals, rather the modern slew)

I feel I’ve got to the point, now, where I don’t really feel a tourist when I’m wandering around. I know my routes to get from The Tate Modern to the lovely art shop behind The British Museum.

This weekend’s visit I was determined to get to know the Seven Dials area a bit better. I only failed in the sense that I got to know one of the pubs a bit better. Ah, well. I’ll have to try again another time, I guess.

Was I comfort eating? I don’t know. I don’t think so.

It just happened to be morning.

And I just happened to be feeling a bit low.

So, I grabbed the opportunity to grab a quick breakfast at a local supermarket cafe.

(Please note : Some of my illustrations are examples of my trying to live a low carb/no carb lifestyle. Here we have a case in point: bacon, eggs and mushrooms. I passed on the hash browns and the toast in favour of an extra slice of bacon)

Well, it was yummy until I received an unwelcome text from … well … it wasn’t anyone on the Hollywood ‘A’ list, that’s for sure. Although I wish that they were acting ‘being blunt’.

Sometimes it would be nice to escape and rewind to a simpler time when we weren’t all just a phone call, or a text away.

Still, the cooked breakfast certainly made up for the dismal attitude of some people.

Breakfast on a day with big, exciting plans is always such a wonderful routine.

Whether it’s, like here, a hotel meal before heading off to explore a city. Or an early morning bacon sandwich before heading out on the road to holiday. Or the quickly grabbed breakfast on Christmas morning, with the floor strewn with new and exciting things and scraps of torn paper wrappings.

This was a bit of a double whammy of an explorers breakfast as we were heading out into London (always a pleasure) for an explore and then meeting up at Covent Garden for the ballet.

Cafe Royal – The first day of the holidays

There’s always that wonderful feeling – the first morning of the holiday.

Waking up to a fresh morning, with no work.

Generally I use Winsor and Newton paints.

I have a little metal palette which can hold about eighteen half-pans.But some of the colours I have in there are full pans (because they get used more than the others). Food painting seems to use more yellow ochre and I also have a full pan of neutral grey)

Some of the colours are from an old Daler Rowney set, most are Winsor and Newton. I tend to pick from these two companies (just because they’re the most available in the UK)

As far as actual colours go I’ve just gone with what I like.

I’ve got three different yellows (one of which is Aureoline – a fab transparent), an orange, a red (I’m still trying to find a transparent or translucent red!), Opera Rose (which I find essential to produce dazzling purples and pinks), a couple of blues, three greens (one of which is a really light green – for salad leaves), then a range of browns from Naples Yellow to Van Dyke Brown.

I don’t use black at all. Instead I used to mainly use Winsor and Newton’s Payne’s Grey, but have recently started to use the Neutral Grey colour instead, as it is more translucent.

I tend to prefer translucent over opaque.

I sometimes use Koh-I-Noor‘s stackable pure pigments (the colours of which really op out!); these are what I used for this breakfast sketch.

Just recently I’ve been hearing good things about Schmincke; so might have to try some of theirs out