My default setting for pizza is generally the hotter-the-better; you know the type – the one with the extra pepperoni and extra chillies on it. It’s usually there on the menu described as Vesuvio, Lava, Flame or anything else which involves molten rock or burning.

I just wanted to tell you this to set the scene – I’m not some fiery-pizza green horn. I know what I’m doing. I’ve been there before in the depths of flame and ash.

So, I was a little surprised to beaten by a pizza with an innocuous-sounding name.

My first piece was hot; well not just hot it was extremely hot. Tasty, of course, but far hotter than I’d expected.

Only compounded by a second piece which further added to the intensity.

By the third piece (And can I just stress that these were pieces cut off with a knife and fork, not slices of pizza) I had to take pause and ask for a glass of water.

Caroline and Lucy were amazed that I’d seemingly been beaten so quickly by this pizza. So, I struggled gallantly on. Slowly.

I did manage to finish this challenging pizza – but it did take a little while longer than I’d anticipated. It was very tasty and, surprisingly, I would have it again.

I’ve since discovered that it was the n’duja sausage which gives it such a blast of heat.

I don’t often have a pudding, so when I do crumble (!) and succumb to some sweet delight I have to start a fresh page for my drawing. 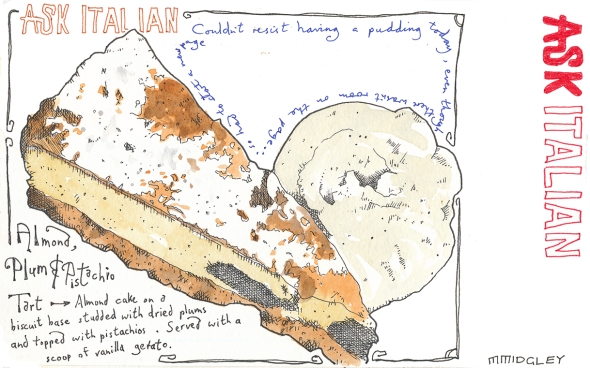 I really could not resist having a slice of this deliciously light almond tart. The plums were sharp and sweet and the pistachio frosting was soft and subtle.

Well worth breaking my pudding fast for.