On the Cover of a Magazine

This month’s Camping and Caravanning Club Magazine boasts my illustrations splashed across the cover.

Well, actually, not just splashed across the cover, but the magazine title too. I guess it seems quite fitting when the magazine is a Food Special

Some of these illustrations are from the inside of the magazine – this month’s Eat Local article is about cafes.

But most of them were commissioned for cover. All cakes and tarts and puddings and a barbecue. 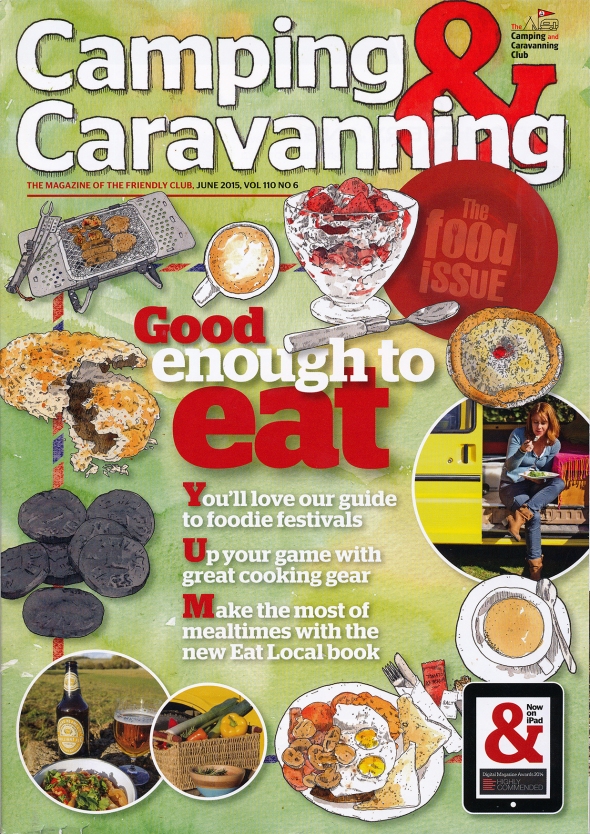 I’ve finally added a link to my shop on Etsy.

Now, this shop is quite, quite tiny at the moment. (A shoppette, if you will) I’m in the process of producing cards and what-not to full it up a bit more.

At the moment there are a couple of postcards on there, as well as a button to commission a recipe drawing from me.

If you’d like a recipe drawing: Just send along that special family recipe, with a photograph of the finished dish and I’ll turn it into a permanent piece of recipe art that you can have on your kitchen wall, or give away to a friend. My mum’s Bakewell Tart is one of her signature dishes, for example. So I’m illustrating that for her kitchen wall.

The postcard pictures of a pear and a banana were done as gifts for people. A friend has asked me to make an apple in the same series, so they can have the series of three on their kitchen wall.

There are more things on the way, in the next week or so. I’ll fill you in when they’re up and running.

I’ve been thinking lately of trying to make something more commercial with my illustration work. Something saleable, something Etsy-able.

Some people advocate the do-it-yourself approach; it is, after all, perfectly possible to set up a Paypal button on this blog and sell things directly through this space.

But sites like Etsy offer, just like a real marketplace, a passing trade. Or at least customers who are making a search.

The problems I come up against are;

I’m leaning towards gift cards and notebooks, I think.

I particularly enjoy drawing food and drink, so it seems an obvious choice to focus on those areas for card designs, certainly initially. I’ve had a couple of friends make suggestions about subjects that they would like illustrated in my style. And a couple of friends have suggested that I illustrate recipes for people, which is an interesting idea.

It would be lovely to have the time and space to experiment.

Time – Hey, I’m just trying to make way in the world. I’ve got bills too y’know. And if it means I have to spend some time in my other life, making a few pounds here and there, then so be it. But, it sure would be nice to devote time to sales.

Space – My studio isn’t really that big (in fact some might describe it as a little office in the loft-space of a semi-detached house on the outskirts of a fairly large Northern town in Yorkshire … because it is!)

In his book “Steal Like an Artist”, Austin Kleon writes about being creative with limitations, using those limitations to your advantage. In the equally good book by Hugh Macleod, “Ignore Everybody”, Hugh reminds us that [No.23] nobody else cares about your passions, so you have to be the one to drive it forward. But reminds us [No.13] that the difficulties in creating will all be worth it in the end.

Hence the glazed, raspberry doughnut illustration. Is this the way I should go with cards and notebooks for merchandise?

I actually quite like the half-eaten-ness of the doughnut – it sure looks tempting.

(Pssst … in reality, the reason this doughnut was half-eaten was that nobody at the party actually liked it! It looks like a couple of bites have been taken out of it, when in fact, it was lots of little bites. Nobody like the sickly, raspberry frosting! My illustration is what was left, after everyone had had enough of it!) 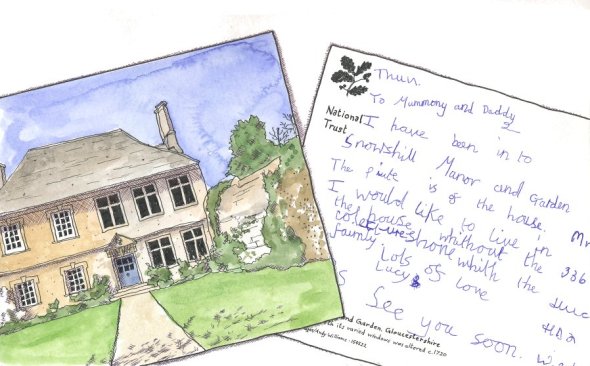 Last year Lucy went on holiday with her Momma and Poppa to Gloucestershire and sent us this postcard from a visit to Snowshill Manor.

Charles Wade spent his live collecting; everyday and extraordinary objects from across the globe. He bought objects because of their colour, craftsmanship and design and restoring the house to keep them in.

The house is packed to the rafters with 22,000 or so unusual objects – from tiny toys to splendid suits of Samurai armour.

The hardest part of this piece was copying Lucy’s handwriting (and mis-spelling!)

“I have been in to Snowshill Manor and garden. The picture is of the house. I would like to live in the house, without the collection, with my family”

I recieved my Arthouse Exchange pieces in the mail today.

along with two stamped, self-addressed envelopes.

“Peary Tale” went to a group of three sisters at Bright Side Designs.

Arthouse Co-op, in return have sent me two lovely pieces submitted by other artists;

The first by Kurtina Cook. I wish I could work in a more abstract mode sometimes. I love the starkness of the black and white.

and the other, which is neat little watercolour sketch, by Beth Parker. Beth’s painting has me wondering whether it was painted from life – I’m curious about those figures on the shoreline.

Brighouse and Beyond exhibition

Posted: May 21, 2011 | Author: matthewmidgley | Filed under: My path goes on, Uncategorized | Leave a comment 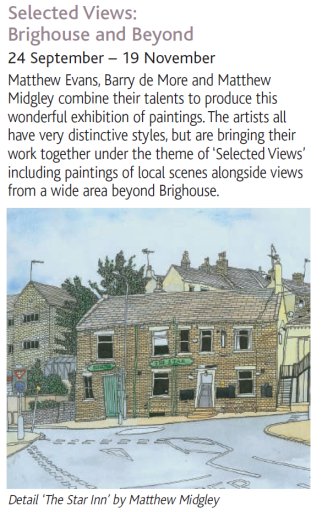 It’s exciting having some of my work featured in the latest ‘What’s On in the local area’ booklet. Details about the exhibition that I am taking part in in September.

I’m focusing on pubs, public houses, in the local town of Brighouse, a small, urban market town in West Yorkshire.

If you’re around in Brighouse sometime in October pop in to the Smith Art Gallery, which is located in the town library.