It feels like a super-long time since I last blogged anything. Those darned burglars! What a palava having to locate receipts and passwords and the like. Then wait for the insurance company to either replace or repay.

In the mean time I’ve had a couple of commissions to complete …one sweet and one scary. Well, not actually scary, but a little strange. 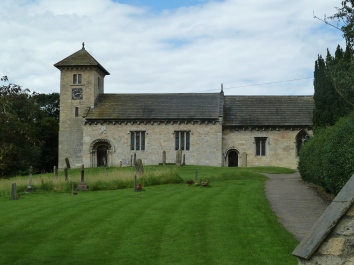 Healaugh Church is located out in the countryside of Yorkshire, just outside York (The old capital city of Yorkshire). It’s a quaint old church with a lovely view across the vale of York.

And it has the most beautifully decorated main entrance of a quaint country church. Well, age has not been that kind to it and much of the intricately carved stone has been weather-worn away.

A colleague at work asked me to draw to draw the main doorway as a gift for some friends.

I have to admit I kind of fell in love with this doorway myself as the drawing progressed, and when it came to handing the drawing over I was quite torn. 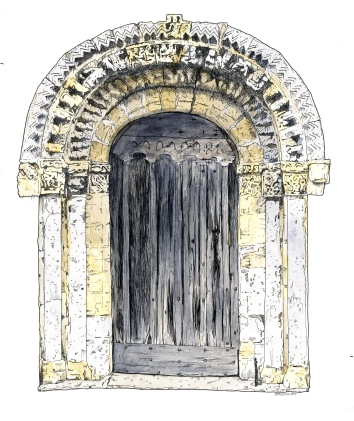 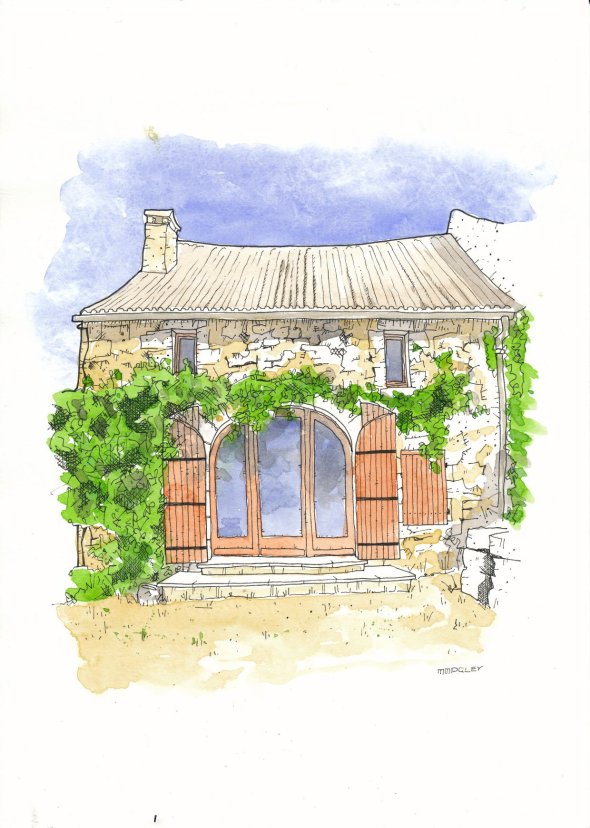 It’s been a while since I’ve done a commission. It was a pleasant change, amongst all the plates of food, to draw a house.

This drawing was for a work colleague. They’ve stayed at this little villa in France a few times and this commission was by way of thanking their friends, who own the property.

Having been away from drawing buildings for a short while it was interesting seeing what influences I could carry over from how I’m working drawing food; namely adding more texture with ink markings and with different shades of paint overlaying.

I scream. You scream. We all scream for Ice-cream!

June’s magazine spread was all about ice-cream.

My heart sank a little. For while I enjoy food; trying new flavours and combinations. There are some foods which I have fallen out of love with, and one of those is ice-cream.

Sure I enjoy making ice-cream still (Malted, chocolate chip, if you must know!), but eating ice-cream is something I’ve kind of stopped doing …
So, for the magazine I knew that some illustrations of ice-creams were a given, but what else? 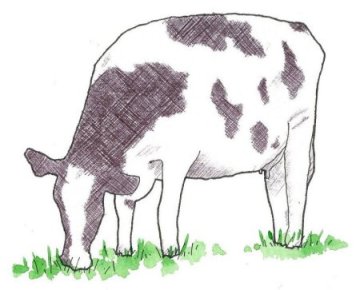 First of all I looked at the beginning of the process; the cow.

As part of my research I headed up to the local dairy ice-cream parlour; to catch some of the dairy cows used to create the ice-cream and also to get some pictures of ice-creams.

So here we have a lovely Holstein-Freisian traditional cow-style cow.

I rather liked the drawing I did, as it appeared a lot smoother than a real cow and ended up looking like a model cow, like the ones located around Milton Keynes. 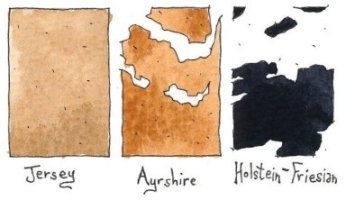 Next – I thought it might be handy to have a cut-out-and-keep chart for dairy cattle.

When the magazine requests beef again I’ll sort out a chart for beef cattle.

When we arrived at the ice-cream parlour Caroline and Lucy immediately dashed off and began ordering ice-creams! I was a little more laboured in my buying; trying to weigh up different colours and flavours, combined with the different kinds of cones.

In the course of my research I discovered a love of … banana flavoured ice-cream.

Of course I had to work from photographs for this assignment, which I don’t really enjoy doing, but at least they would be my own photographs, which always feels better; as I can choose my own angles and details.

My illustration was a combination of several different ice-creams, for which I swapped and changed cones and colours to suit the drawing. At least two of the drawings were made from the same ice-cream from a different angle. 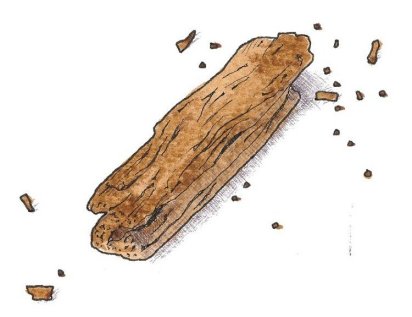 … and then topped off with a Cadbury’s flake. 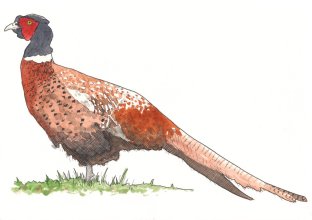 This is the illustration I produced for the February issue of ‘Camping & Caravanning Club’ Magazine. The article was about using different kinds of game in cooking and there was some debate about what the illustration could be of, without upsetting those of a more delicate sensibility.

So here is a very much alive pheasant (Although I do think that it looks quite nervous!)